The Construction of De Anza College 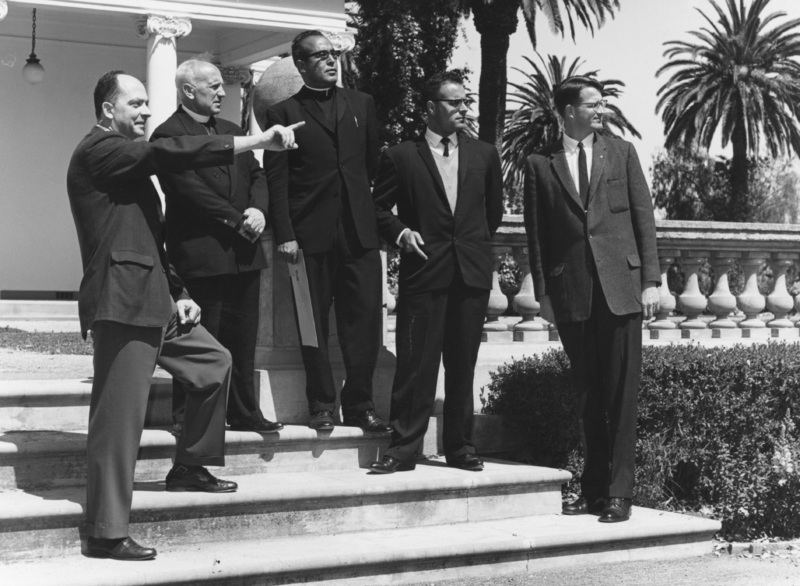 A group of visitors stands on the steps of Le Petit Trianon in 1965. This buidling is now the California History Center. From left to right: Dr. Robert Smithwick,  Father Murrillo, Father Magallanes, Father Prol, and A. Robert DeHart, President Elect of De Anza College.

When the Foothill-De Anza Community College District was formed in 1957 (then called The Foothill Junior College District) the plan was to open three campuses in the south bay area. Not long after construction began at the Los Altos Hills site for Foothill College, District Superintendent Calvin C. Flint and the Board of Trustees turned their attention to purchasing land for the second campus. The choice came down to two parcels of land, on either side of Stevens Creek Boulevard in Cupertino: the Euphrat property (131 acres with 13 acres committed to a freeway right of way) and the Fisher-Parrish property (93.3 acres with 8.8 acres committed to freeway right of way). The district wanted at least a 100-acre site for the new campus. The Fisher-Parrish site would work only if augmented by the Saich property, which was offered for a minimum of $14,000 an acre. During the October 20, 1959, board meeting, Mr. E. F. Euphrat lowered his asking price to $13,000 an acre. Shortly after 9pm that evening, the trustees voted unanimously to purchase the Euphrat parcel for a net expenditure of just over $1.1 million.

In 1962, only one year after the completion of Foothill College, District voters approved, by 4 to 1, a $14 million bond for construction of the second campus. 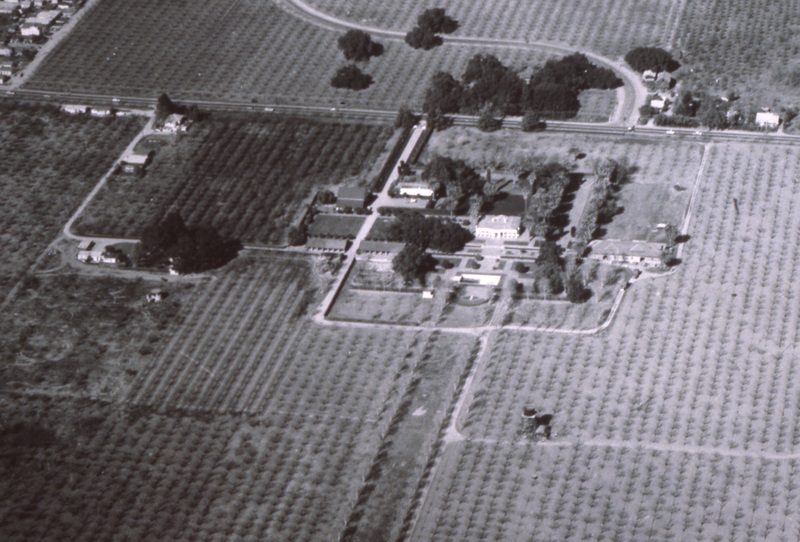 The Cupertino Chamber of Commerce sent a letter to the Board of Trustees in January of 1963, stating three preferred names: 1) Cupertino College, 2) Cupertino Campus-Foothill College or 3) Foothill College of Cupertino.  The Board of Trustees had previously decided that they did not want the college to be identified with any incorporated city, so none of these options were seriously considered. Ironically, in the same letter addressed to the Board of Trustees, the Cupertino Chamber acknowledged that “Cupertino” might not be considered an appropriate part of the name so, as an alternate, they requested that the Board “consider the name: De Anza College.” The Chamber provided a bit of history about Juan Batista De Anza, a famous Spanish explorer, and suggested that De Anza “has an urgent, stirring sound – with a bit of a snarl to it. The kids could love it!”

A name was selected in early 1963, from two finalists: Piedmont, which means ‘foot of the mountain,” and De Anza, after the famous Spanish explorer Don Juan Batista de Anza. On the final vote, De Anza College was selected by the Board of Trustees.

The group that was responsible for the award winning design of Foothill College, Architects Associated Ernest J. Kump and Masten and Hurd, chose for the De Anza campus a "contemporary mission" design, which reflects the land's early history. Buildings with adobe walls and red tile roofs would blend Spanish and modern architecture. The Architects Associated design was approved by the Board of Trustees on April 15, 1964. Calvin Flint then suggested that several Board work sessions be scheduled for the purpose of studying the plans in detail and to determine if the project was moving forward in a satisfactory manner. At the May 20, 1964 Board meeting, the Board further noted that "The Architects must understand clearly that the total budget for De Anza must not exceed $15,500,000. There must not be a repetition of the Foothill bidding fiasco." This was a reference to the fact that all bids for the construction of Foothill had exceeded the planned budget. A second bidding process, breaking the campus into sections that would be built by different bidders, successfully brought the Foothill project to completion while staying within the proposed budget. For the construction of De Anza College, District Superintendent Calvin Flint proposed that "bid alternates be included in the bid specifications which would provide a $1 million contingency, if necessary, by deferring construction of facilities which will not be critically needed the first year, such as the planetarium, auto shop, forum building, auditorium fixed seating and stage items, etc."

There were many large and small decisions to make. Some of these decisions were based on lessons learned from building Foothill College. For example, after much discussion, it was decided that the Olympic size swimming pool would be divided into two - a large pool for swimming and a smaller, deeper one for diving.  A single Olympic size pool at Foothill had served both purposes and the administration wanted more flexibility in the new campus’s facilities.

At the May 19, 1965 meeting of the Board of Trustees, the following bid schedule was proposed:

The Superintendent indicated that Bid #2 would provide for an eighteen month contract completion date (June 1, 1967) which assured adequate leeway for unforeseen delays due to bad weather, etc. The flexibility of this bid schedule allowed, as Dr. Flint proposed, the ability to postpone portions of the construction that were not deemed critical for the planned college opening in September of 1967. The ambitiously designed 2400 seat auditorium would be one of those projects that was delayed. The Flint Center for the Performing Arts, as it was later named, would not be completed until 1971.

In November of 1965 the contract for Bid #2 (construction of Phase 1 of the De Anza campus) was awarded to the Barnhart Construction Co. and Dillingham Construction Co., a joint venture, for their low base bid of $10,566,516. Bidders would have an opportunity to bid on the construction of the Campus Center and the Auditorium in Spring and Summer of 1966. 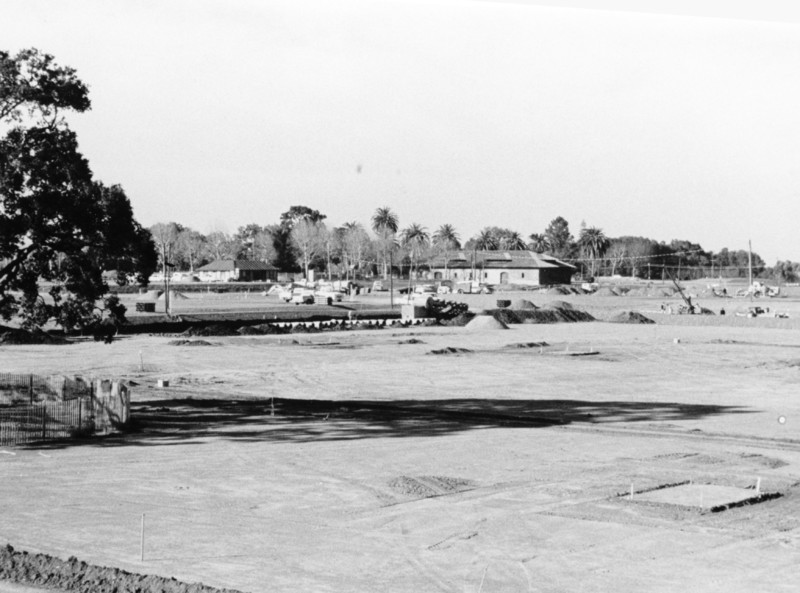 By 1966, the land had been cleared and construction of the college had begun. Near the center of the photo can be seen the winery building, which would later be home to the De Anza College Bookstore. It is now Financial Aid, Printing Services and adjunct faculty offices.

Foothill College had originally been designed to support a maximum enrollment of 3,500 students. By its third year of operation Foothill had already exceeded that estimated maximum capacity and, by November of 1965, enrollment at Foothill had grown so quickly that emergency measures were being considered. At the Board of Trustees meeting on November 17, 1965, Dr. Calvin Flint reported that “enrollment projections for 1966-67 indicate that some emergency measures must be considered to alleviate the crowded conditions at Foothill during the period prior to completion of the De Anza campus in September 1967.” He indicated that “several approaches are being considered, including the possibility of scheduling Saturday classes, or the rental of 6- 7 temporary classroom buildings, although the latter would not provide a solution to the anticipated need for additional temporary parking facilities.” The Superintendent indicated that the possible scheduling of Saturday classes would reduce the number of temporary classroom buildings needed to 1 or 2 and would probably eliminate the need for additional temporary parking for Monday - Friday classes--a savings of approximately $50,000 for one-year use items. Architects Associated indicated that De Anza College was designed to accommodate up to 6,500 daytime students, almost twice the capacity of Foothill’s original plan. In 1967, eighty percent of all college freshman and sophomore students in California were enrolled at junior colleges, so the potential for growth seemed almost unlimited.  Due to booming enrollment, Foothill College and the District Administration were anxiously anticipating the opening of the second campus. 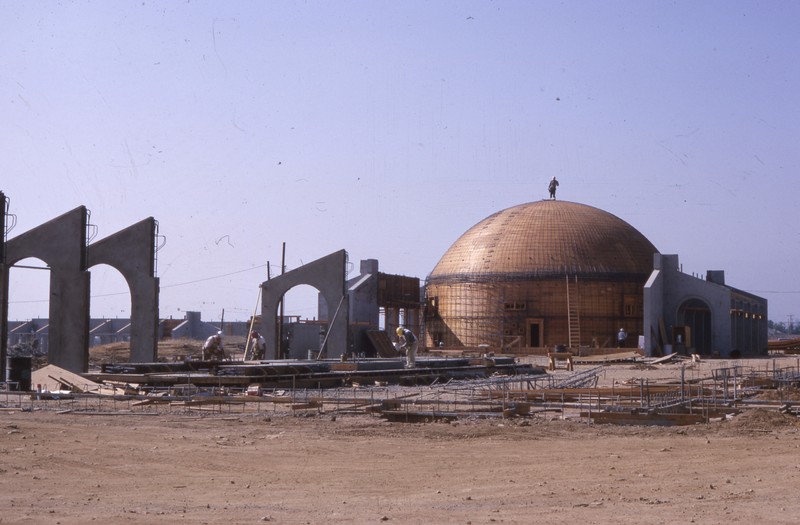 The planetarium dome at De Anza college is under construction in 1966. Archways, with no buildings yet attached, are springing up all over the campus.

In January of 1966, the Board of Trustees received a letter from E. F. Euphrat indicating his intention to make a gift to the College of approximately $20,000 “to be used in the acquisition of paintings to be exhibited in the pavilion on the De Anza campus which will be used as an art gallery to be known as the Helen Euphrat Art Gallery.” Le Petit Trianon, known today as the California History Center, was commonly referred to as "The Pavilion" prior to the construction of De Anza College and was planned to be the location for the Euphrat Gallery. The Gallery was never installed in The Pavilion, but was provided space in the A-9 building, directly adjacent to the Flint Center, where it operated successfully from 1967 through 2009.  In March of 2009, the Euphrat Gallery was given a new home in the Visual and Performing Arts Center, where it continues today.

Among the attendees at the groundbreaking ceremony were Cal Flint, Bob Smithwick, several Board members, officials from the City of Cupertino and reporters from varous news outlets. This film has no sound.

This super-8 silent film documented the groundbreaking ceremony at the site of De Anza College in Cupertino in 1966. Among those present were Calvin Flint, Robert Smithwick and A. Robert DeHart.

The groundbreaking ceremony was scheduled for January of 1966, only eighteen months before the planned opening of the college. However, given the experience of building Foothill College, the administration was confident that the project would be completed on time and on budget.

By March of 1966, excavation had begun on about a dozen buildings at the De Anza site. Construction proceeded at a hectic pace and, as anticipated by the Board of Trustees, there were slight delays caused by weather. Despite the weather and a few minor technical issues, the college opened as planned on September 11, 1967 to over 3,000 students and visitors. The first week of operation at De Anza was designated as Orientation Week: five days of rallies, meetings, campus tours, speeches and the College Hour (Monday and Wednesday at 1pm) offering free sodas and conversation. The first week of classes concluded with a Friday night dance at the main gym called “Meeting People – Going Places!”

Although Kump, Masten and Hurd designed both Foothill and De Anza Colleges, the architectural appearance would be distinctly different. However, it is noteworthy that each campus has won the same prestigious National Honor Award of the American Institute of Architects, Foothill in 1962 and De Anza in 1969.

As with Foothill, De Anza College received immediate acclaim for its architectural design, campus layout, extensive program offerings, and it’s talented and dedicated faculty. An article in the San Francisco Chronicle, December 19, 1969, stated, "Both Foothill and De Anza Colleges - five miles apart - are public community colleges. They are without question the most exquisite of the 90 in the State." 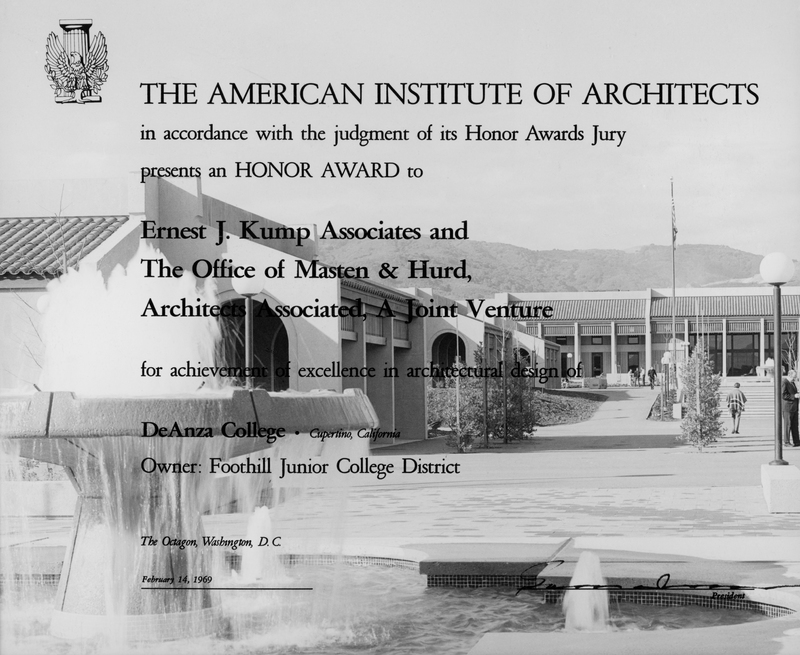 In 1969 De Anza College and Architects Associated (Ernest J. Kump and The Office of Masten and Hurd) received the Honor Award from The American Institute of Architects.