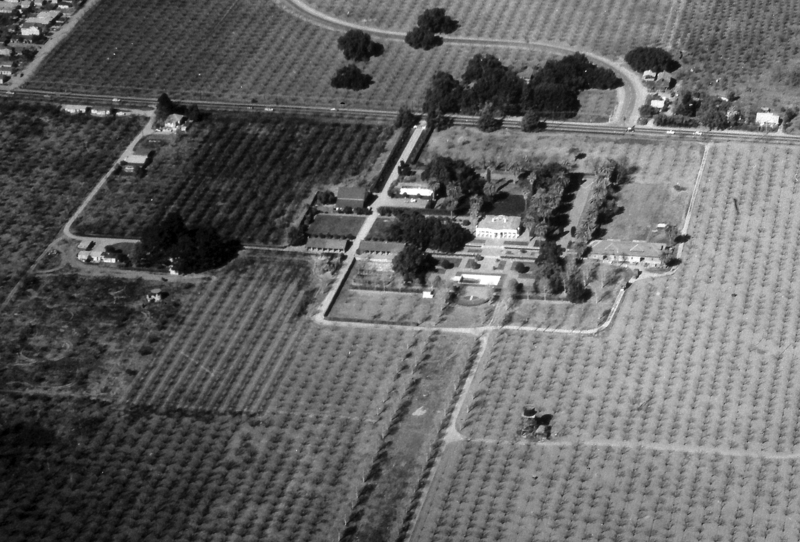 An aerial view of Le Petite Trianon and some of the surrounding land. Just behind the building is Stevens Creek Road (later Blvd.) On the right side of the photo is the winery building, which still stands on campus today. To the left of Le Petite Trianon and slightly below are two adobe structures, which were used for servant quarters and winery workers. A reproduction of one of these buildings can be found on campus in the same location as the orginal. Date of photo unknown. 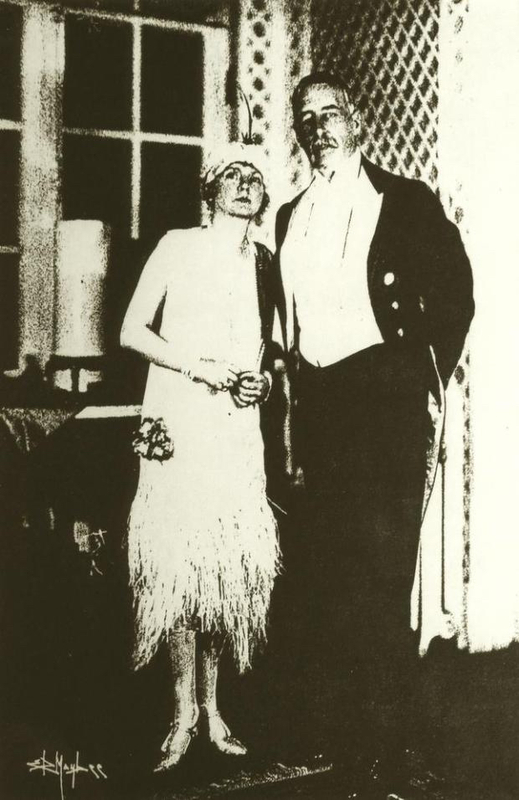 Charles and Virginia Baldwin, owners of Le Petite Trianon until 1909. They had moved to Colorado, where this image was taken, probably in the 1920s. 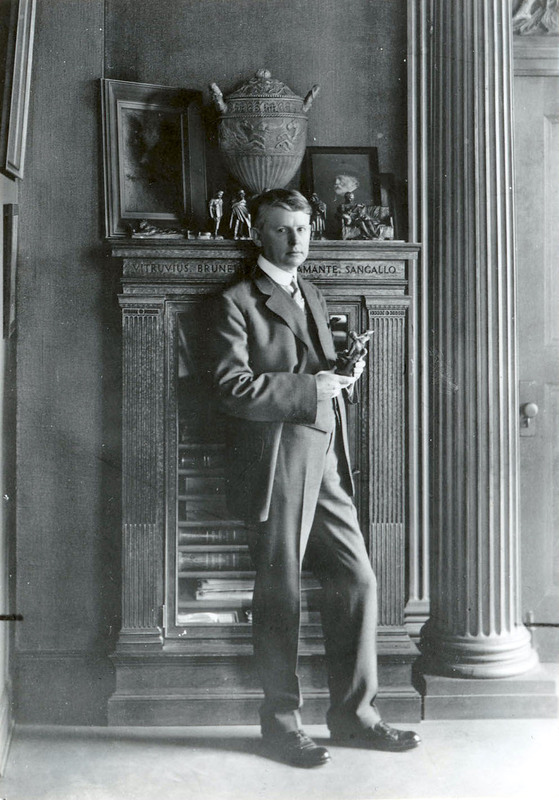 Famed architect Willis Polk, shown here in his San Francisco office in 1913, designed Le Petite Trianon, which was frequently called The Pavilion by its various owners.

In 1887, the son of Civil War admiral Charles Henry Baldwin, Charles Adolphe Baldwin, a wealthy San Franciscan looking for an alternative home on the Peninsula (as many did) and a place to grow grapes and make wine, became the owner of the 70 acre parcel that now encompasses the majority of the site of De Anza College. He planted vineyards and built the Beaulieu winery and wine cellar (Beaulieu meaning “lovely place”) and made award-winning wine. The winery building later housed the original college bookstore and lounge. In 1895 Baldwin built the beautiful home that now houses the California History Center. Nicknamed Le Petit Trianon, it was designed by Willis Polk and Associates, San Francisco, and was surrounded by ten acres of formal gardens in the style of Versailles. After their marriage in 1896, Charles and Virginia Ella Hobart Baldwin enjoyed their ornate pavilion and entertained lavishly. Virginia Ella Hobart was a daughter of Walter Scott Hobart, who had gained wealth from the Comstock Lode. The Baldwins had the first private swimming pool in Cupertino, located in the Sunken Garden. The site of that swimming pool is now the fountain area of the Sunken Garden. Along with the Pavilion (which was relocated from its original site for the building of the Flint Center for the Performing Arts) the Baldwin Wine Cellar and Sunken Garden are extant. A replica of one of the two Baldwin workers’ cottages has replaced the original East Cottage. The West Cottage has been demolished. 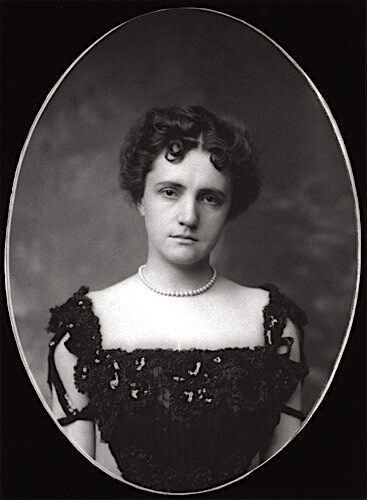 Harriet Pullman Carolan, along with her husband Francis, became owners of Le Petite Trianon and the surrounding vineyards in 1909.

By 1901, circumstances led the Baldwins to relocate to Colorado Springs, Colorado. The Peninsular Railway line was routed past the property on Stevens Creek Road shortly after the Baldwins left.The Baldwins kept and managed the Beaulieu property until their friends, Francis Carolan and wife, Harriett Pullman Carolan, bought the estate from them in May 1909. Harriett Pullman was the daughter of George Pullman and an heiress to his railroad car company fortune. In late September, 1909, the Carolans celebrated their new home by inviting dozens of friends for a lavish patio dinner. For this occasion, the Sunken Garden was filled with water and gondolas were set afloat with singing gondoliers as reported in the society columns. The Carolans owned other homes and Harriett continued ownership of Beaulieu after Francis died, and while remarried to Colonel Arthur Schermerhorn. 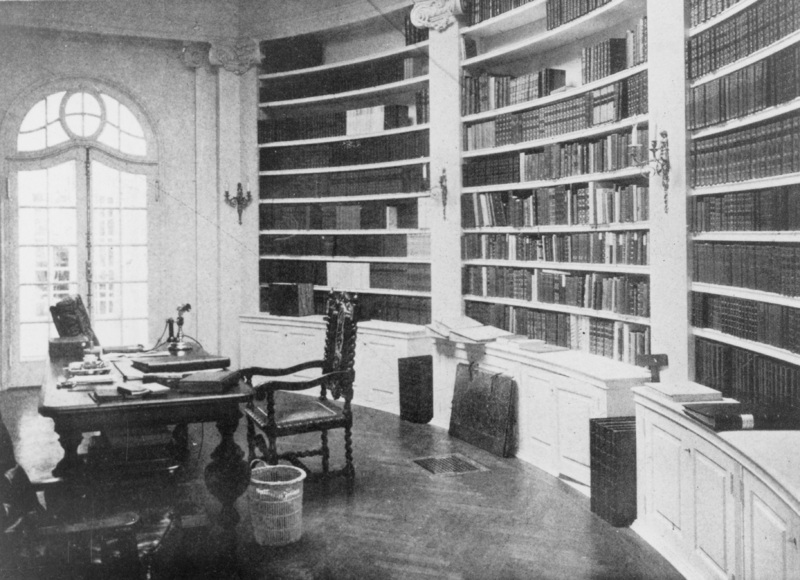 The library room inside Le Petite Trianon. Date of photo is unknown.

In the late 1930s, Martha Christeson, widow of Wells Fargo Express vice-president Andrew Christeson, purchased Beaulieu. She was a benefactor of San Jose’s Rose Garden and child care efforts in the area, and was very active with the Beaulieu land, sometimes seen driving a tractor across the property. Her short tenure at the estate ended with her own death from a heart attack in the Pavilion. 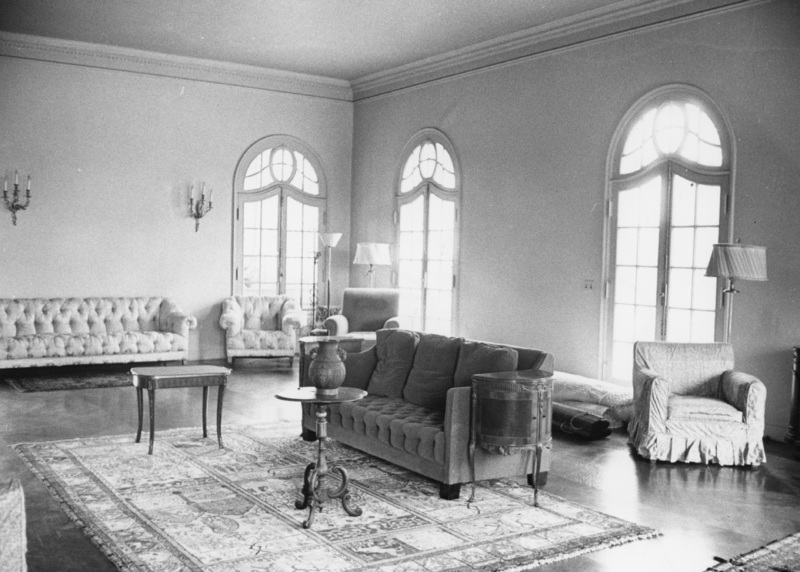 A view of the living room of Le Petite Trianon as it appeared in 1959.

After the death of Mrs. Christeson, the estate was purchased in 1940 by Emanuel Frederick Euphrat and Helen Euphrat, owners of the Pacific Can Company. The Euphrat family lived in a ranch-style home on the property. Mr. Euphrat sold the estate to Foothill Junior College District in the late 1950s, with the understanding that he could continue to live on the land for a period of time. The Helen Euphrat Museum of Art is named in his wife’s honor.

Le Petite Trianon in the early 1900s. The roof of the older home of the Baldwins can be seen just above the newer Pavilion building. One of the adobe buidings that was used to house servants can be seen just to the left of the Pavilion, partially hidden by trees. This image was taken from the location where the DeHart Learning Center now stands.