When students Bob Ballou, Dick Thiesse and Bob Johnson proposed a student run radio station at the new Foothill College, the Board of Trustees was inclined to wait until the new campus was built in Los Altos Hills, but the students were insistent, and on November 17, 1958, the Board approved funding for the new radio station and Ballou filed an application to the FCC for a license. 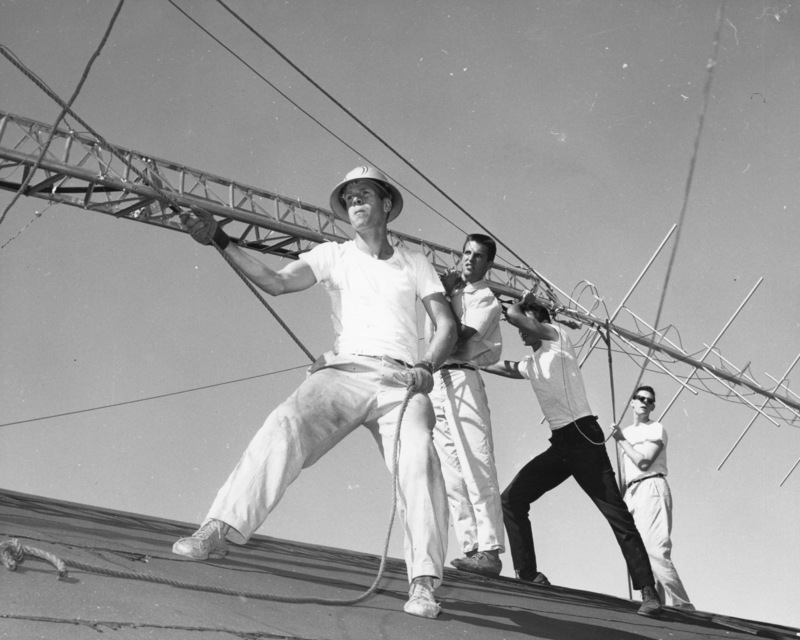 Raising the KFJC radio antenna on the roof of the Foothill College building in Mountain View. Pictured from left to right are Bob Ballou, Jim Fernbaugh, Nathan Ballard and Roger Murray

The new station was tucked in the basement of the Foothill College building in Mountain View. Construction ran through April of 1959. Bob and his father built some of the furniture to save money. After some delays, the station – KFJC – went live on October 20, 1959. The station only had a 10 watt transmitter so the signal could only be received in about a five mile radius. The early programming for the station was much tamer than today, featuring music to study by, some jazz and classical, but never rock and roll. The station also broadcast lecture series, radio dramas and special service broadcasts. 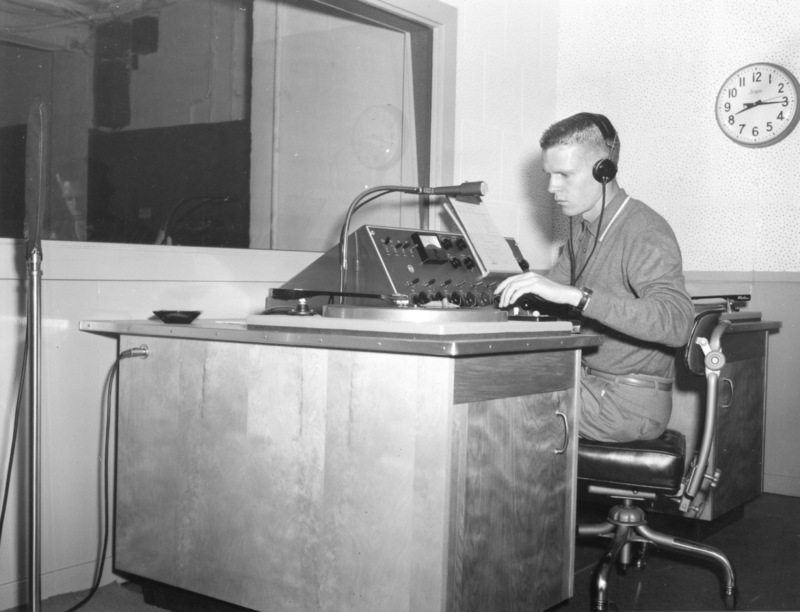 Bob Ballou, station manager, sits at the radio control panel in the basement of Foothill College in Mountain View

The station had its early growing pains: two weeks before the first broadcast, the station flooded when too many students in upstairs classes used the bathrooms at the same time during a break. During the first week of broadcasting, Ballou had to shift programming start times from 8:00 PM to 5:00 PM due to interference from nighttime electronics courses. The FCC required that the new station use a frequency modulation monitor to ensure that it broadcast at the appropriate frequency. Luckily, engineer and Foothill student Ken Gray was able to arrange for Hewlett Packard to donate the $1,900 monitor. In January, 1960, the basement station was plagued by noise from the overhead pipes.

Under Bruce Wentler, who became station manager in February of 1960, KFJC increased its broadcasting to Friday evenings, including such programs as Music for Dining, A World of Music and Songs of Our Land. Other shows included Washington Reports to the People, a series of interviews with U.S. Senators and a program from the National Guard entitled “Let’s Go To Town”.

In May of 1961, KFJC agreed to change its FM frequency from 88.5 to 89.7 to accommodate course programming from the San Francisco Theological Seminary in San Anselmo, which was broadcasting graduate courses near the former frequency (today, local NPR station KQED can be found at 88.5).

Longtime station employee Roger Murray became KFJC’s new station manager in 1961. Murray’s fascination with sound may have been one of the origins of KFJC’s eclectic musical style. Murray recorded all types of sounds, being especially drawn to elevators and organs. He incorporated these noises into a program of musical oddities, even featuring Foothill’s cacophonous air conditioning system. 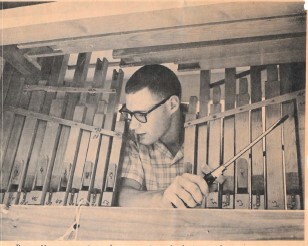 Roger Murray examining the inner workings of a barrel organ

Gardner with crutch on the KFJC radio antenna.

In November, 1961, the station moved with the rest of the college to the new campus in Los Altos Hills. The new studio was a modern upgrade to the old basement, featuring three studios, a master control room, workroom and a musical selection of 6,000 pieces. There was even a newer, larger radio antenna raised on Black Peak near the E.B. Burns ranch in San Mateo County. The station still had troubles to overcome. The following May, the antenna had to be repaired due to corrosion. Station engineer Douglas Gardner used an aluminum crutch as an ingenious repair. A storm later in the year re-damaged the tower and the studio, temporarily knocking the station off the air.

KFJC has grown and changed over the decades. Today the station is still run by student DJs from its studio on the Foothill Campus, but now it uses a 500 watt transmitter and can be heard throughout the Bay Area, though more of its listeners access it online though its website . KFJC prides itself on showcasing new and eclectic music from lesser known artists for "radio that's weirder than you, but not by much."