Willard M. Griffin, his wife and two sons, Charles Willard and Andrew G., moved from Stockton Springs, Maine to California in the mid 1870s. The senior Griffin had an office in San Francisco for the Royal Baking Powder Company. While on a sales trip to Riverside, California in 1881 Griffin got to talking with a young man from Riverside named E. R. Skelley. Together they decided to form a little business buying oranges from local growers and packing them for shipment East. This would be in addition to Mr. Griffin’s work with Royal Baking Powder.

He returned to his office in San Francisco to await word from Skelley as to how their little venture turned out. After totaling up the accounts, Skelley informed his partner that the first season was "very profitable". That was the end of Willard M. Griffin's association with Royal Baking Powder. He went into full time partnership with Skelley, eventually adding raisin and prune packing, and opened plants in Fresno and San Jose, incorporating under the name Griffin & Skelley. Not only was the G & S organization one of the first of its kind in the West, it also enjoyed a reputation as the leader of the dried fruit industry - in business and production methods, as well as quality of product.

Just three years after formation of Griffin & Skelley, Charles W., eldest of the two boys, joined his father’s company. Andrew came in a year later. With Charles handling sales chores and Andrew doing finance and accounting, the firm continued to expand. Major executive decisions were usually made by a committee of four: Willard H. Griffin, Charles W., Andrew G., and E.R. Skelley. Skelley found himself in failing health in 1895, sold out his interest to the three Griffins and retired. 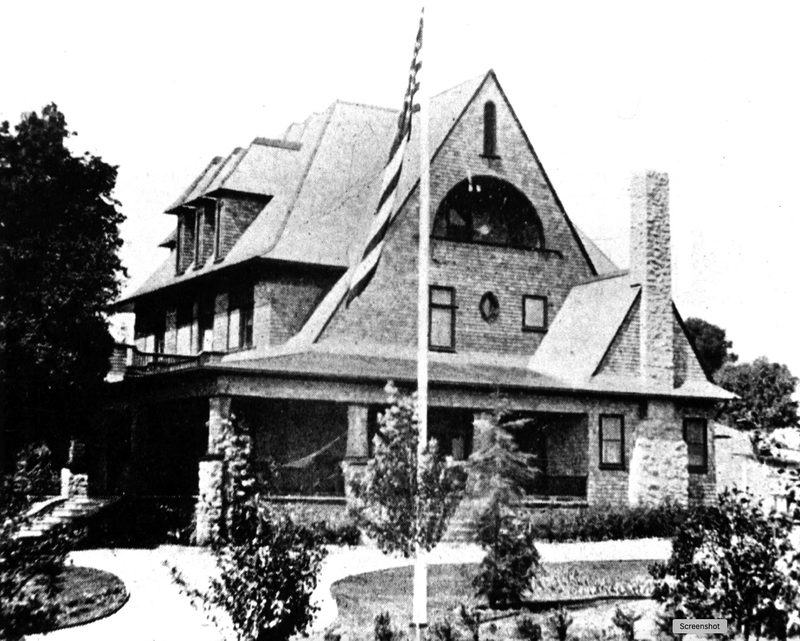 The Griffin family home built in 1901. Date of photo unknown. 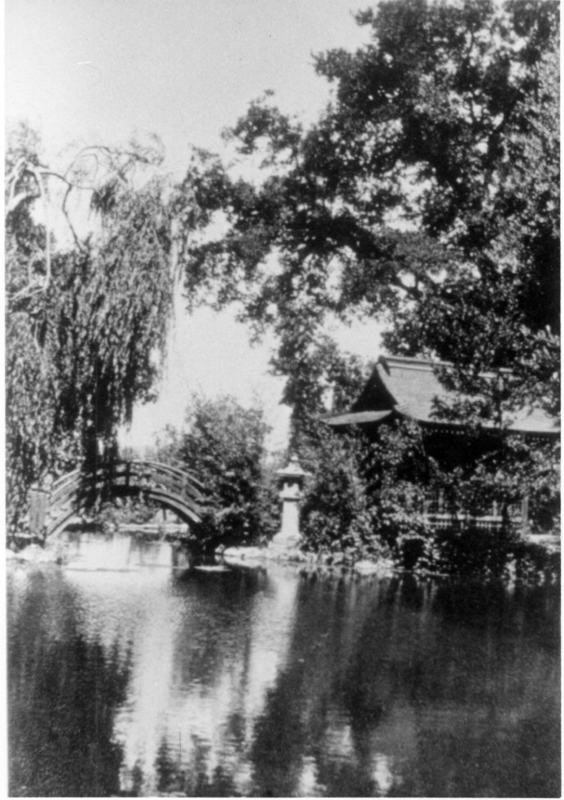 The Griffin family fish pond and tea house provided a serene spot for recreation or meditation. Note the half moon bridge and stone lantern, both traditional items found in Japanese tea gardens. 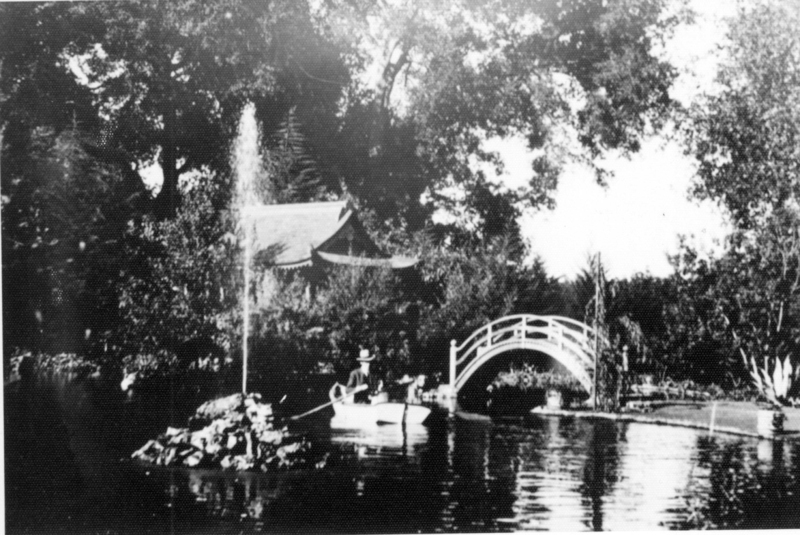 Willard M. Griffin takes his dog for a ride in his rowboat on the fish pond that surrounds an island upon which the tea house sits. Note the gushing water feature in the pond, not seen in other photos. Date of photo unknown, but estimated to be between 1906 and 1913.

Meanwhile, Willard M. proceeded to build his family homestead on the one hundred acre "Lake Grove" estate, located in Los Altos Hills, California.  Wolfe and McKenzie, noted architects of San Jose, designed the lovely shingled home and Greenwood Construction served as the building contractor. The home and the carriage house, which now houses the Foothill-De Anza archives, were built in 1901. The carriage house once housed six work horses, stalls for two cows and the carriage, as well as a workshop and upper loft. Willard Griffin brought several Japanese artisans from Japan to landscape and maintain the gardens throughout the estate. They designed and built the lovely old tea house, an arched half-moon bridge leading to it and other garden structures about 1906. This was where they came to worship and drink their tea, as was their custom, before retiring. The wooden tea house was constructed without using a nail, except in the roof shingles, by these craftsmen who brought their own tools from Japan. 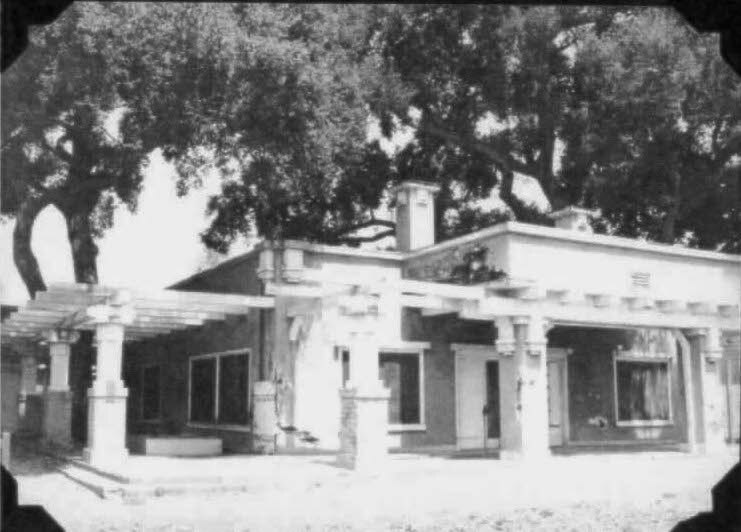 The Griffin family built a second home on their land,  designed by the same architects that designed the first, larger home, Wolfe and McKenzie.

When his two sons were approaching adult age, Griffin decided that he needed another house for one of them; a lovely grey and white flat-roofed home nestled between two large oak trees was built in 1906. He then proceeded to "flip a coin" to see which son would be given the new home, Andrew won the "toss". This second home, built near the present-day tennis courts, was demolished in 1970. It was also designed by Wolfe and McKenzie, an excellent example of a prairie style home and highlighting the versatility of the architectural firm.

A little after the turn of the century, Griffin & Skelley had opened dried fruit packing houses in Fresno, Dinuba, Visalia, San Jose and Chico, and canneries in Fresno, Emeryville, and Grand Island. 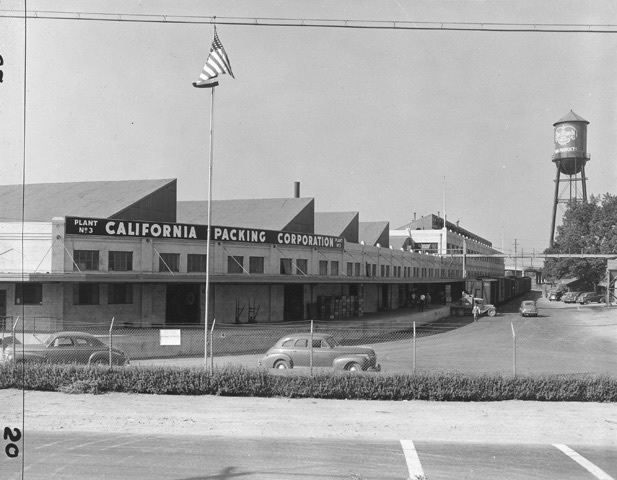 With the death of Willard M. Griffin in 1913, the sons took over full management of the company. Their interests spread beyond California and Griffin & Skelley became sales agents for the Hawaiian Islands Packing Company. In 1916, they joined forces with three other companies to form the California Packing Corporation, now the Del Monte Corporation. When Griffin and Skelley became part of "Calpac", Charles and Andrew shared executive leadership of their company. Both, too, were named Vice Presidents and Directors of the newly formed California Packing Corporation. Andrew retired from active service in 1921. He remained a Calpac Director, served on the Finance Committee, and maintained a lively interest in Calpak affairs until his death in 1954. Charles retired from his Vice Presidency one year after his brother did. He kept regular hours in the San Francisco office until failing health forced his retirement in 1941 and died in 1949.

Willard C. Griffin, son of Charles W., named for his grandfather, followed in his father’s footsteps and spent 40 years with the company, also as vice president and director. He had married in 1921 and left the area. After an absence of about 16 years and upon hearing that the family desired to sell the "family homestead," the grandson returned and bought the 100 plus acres in 1936. In reminiscing, he states that the tea garden and shrine were always a wonderful part of the estate. He recalls the many days spent boating and playing in and around the pond with his cousins at the age of four or five. It was stocked with fish and planted with beautiful colored water lilies. The tea garden area was called "the island" where once stood a huge and gracious oak tree. When it died the shrine took its place, with an arbor of wisteria spanning the huge pond and a beautiful weeping willow whose branches overhung nearby. Lovely granite Japanese lanterns were situated throughout and around the island. The oak trees still remaining around the pond have large circles of black around the trunks. Griffin explained that they are the remaining evidence of “tanglefoot" or flypaper which he put on the trees to keep the caterpillars from crawling back upon them. 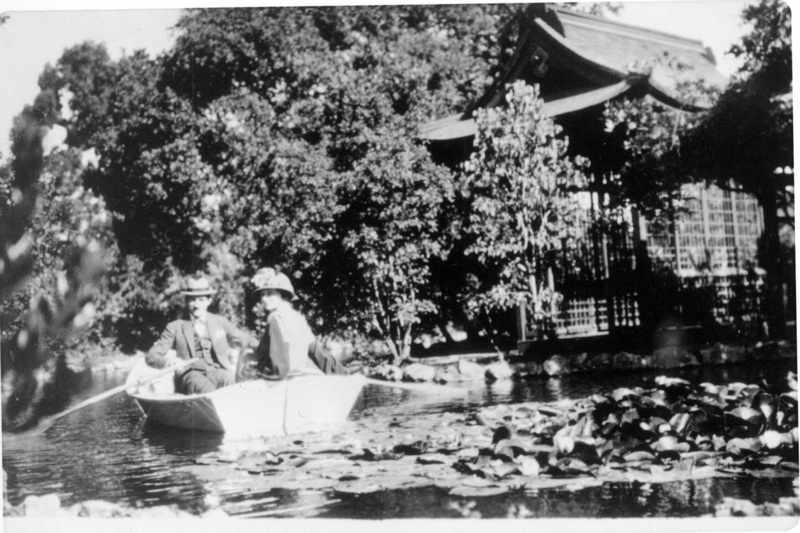 The Griffin fish pond and tea house were a favorite spot for family relaxation. The man and woman in the boat are not identified but are believed to be Willard C. Griffin, grandson of Willard M., and his wife. Photo likely taken in the late 1930s or early 1940s. 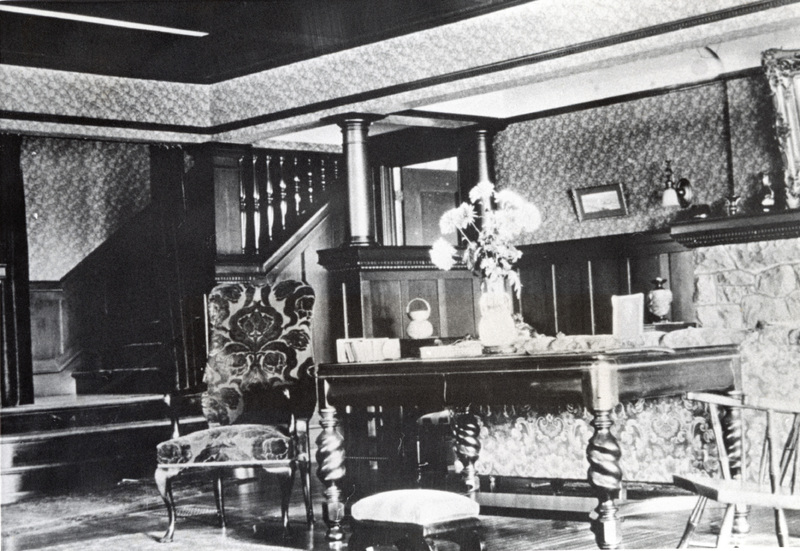 The living room of the Griffin House in 1908 shows the extensive use of California wood used for trim, paneling and staircase construction. 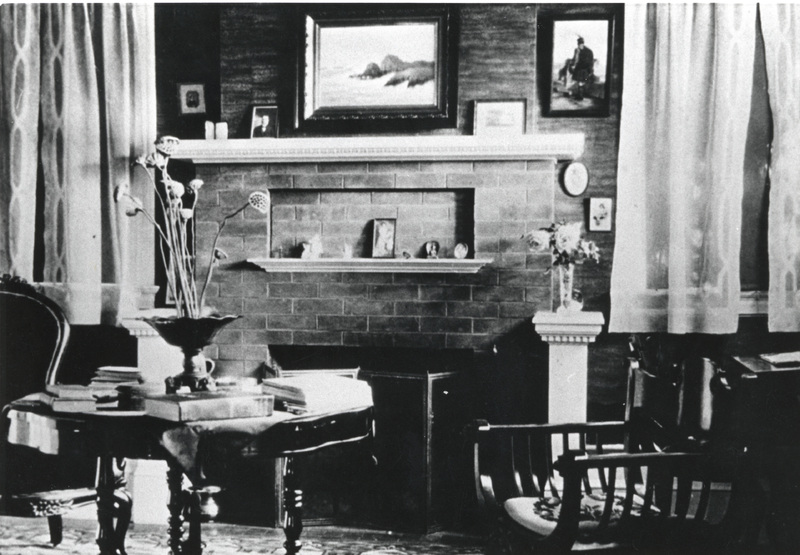 The living room of the Griffin House featured a large brick fireplace, which was the primary source of heat. Photo taken in 1908. 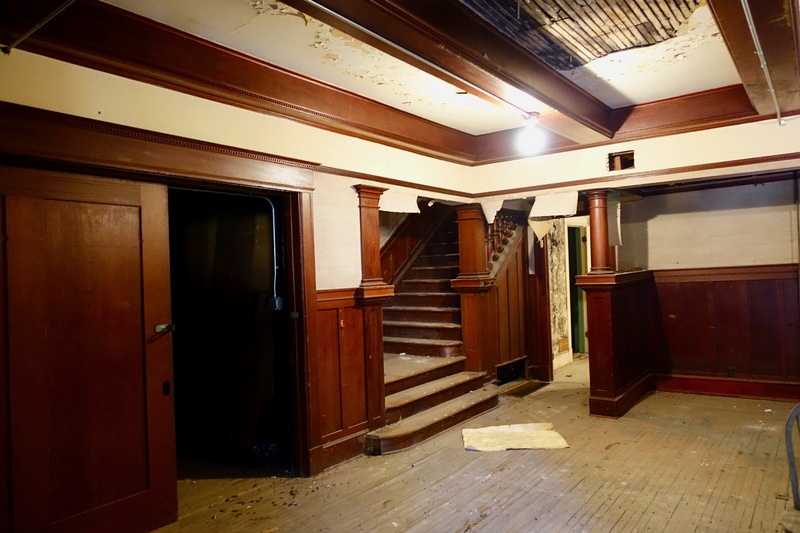 The living room of the Griffin House as it appeared in 2019.

The Griffin House still stands on the lower part of the Foothill campus, although no longer in habitable condition. It is listed on the National Register of Historic Places, along with Griffin’s Carriage House. The house is three levels – The bottom floor has a living room, dining room, study, kitchen and pantry. The second floor has five bedrooms and an indoor bathroom, not always common in 1901. The upper floor is primarily an attic, but it does have a balcony on one side, indicating that the Griffins must have used it for more than just storage. The Griffin House was included in the 1906 Book of Designs, a book of various home designs around the country. The Griffin House had the distinction of being the only house in the book showing both the exterior and interior design. The home is slightly over 5,000 square feet of space and is built entirely from California redwood.

The remains of the Griffin’s fish pond and tea garden can be found near the football field and directly behind the D120 building, completed in 1971 to house the District Offices. It is now the headquarters of Educational Technology Services. This 1971 building is covered on the exterior with wood shingles, reflecting the look of the Griffin House. 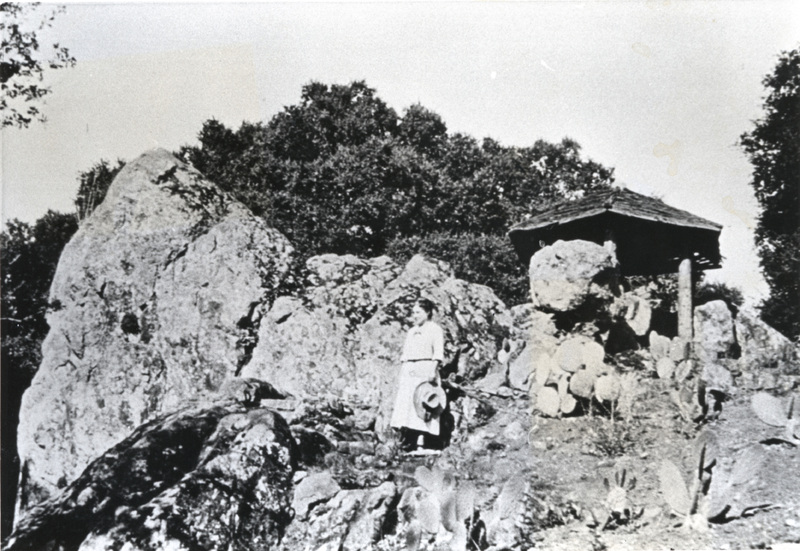 Mrs. Willard M. Griffin stands on the large rocks that now highlight the main entrance to the Foothill College Campus. Behind Mrs. Griffin is a pagoda style structure. The Griffins became enamored of Japanese culture and architecture and used this style of structure on many areas of their land.

The Foothill campus has many design elements that show Japanese influence, in part based on the interests of the Griffin Family. When on campus, you may note features such as the roof design of most buildings and several Japanese style ponds. Due to maintenance issues, these ponds are now filled in and used as planters.The orginal landscaping design was done by Sasaki, Walker and Associates of Watertown, Massachusetts. Hideo Sasaki was very influential in the layout of the landscaping.  Foothill later added a bamboo garden, a new tea house and a Japanese Cultural Center. 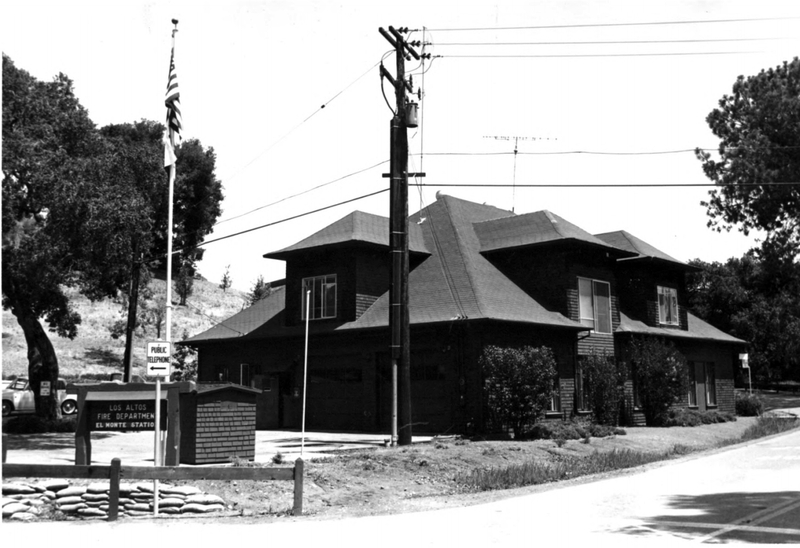 This carriage house, built by the Griffin family in 1901, was used as the Los Altos Hills Fire Department station for many years. Today is houses the district's archives. Photo taken in the 1970's.

The Carriage House was used for many years as the Los Altos Hills Fire Station. It now houses the District’s historic archives collection.

Interview with Willard C. Griffin for the Del Monte Newsletter “The Shield,” 1960