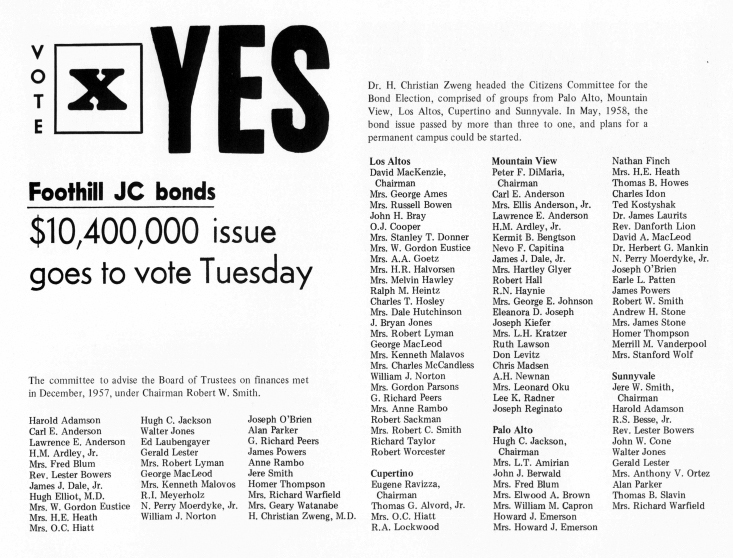 The district's first bond of 10.4 million dollars was used to build Foothill College.

(The following text is an excerpt from the 1980 publication "Foothill College - Twenty Five Years.")

Construction of the permanent Foothill College campus was a complex task implemented through the efforts of trustees, administrators, faculty, architects, builders and hundreds of citizens. In February, 1958, the Citizens' Committee for a Financial Master Plan recommended in their "Summary Report" that:

1) a completely integrated college facility be constructed as soon as possible at a suitable location with the capacity for 3,500 students,

2) a bond election be held in the immediate future to provide an estimated $10.4 million required to finance this facility, and

3) negotiations proceed immediately to acquire a site ... which best serves the community's needs.

In anticipation of the committee's findings, the Board of Trustees in January had already hired Ernest J. Kump of Palo Alto and Masten and Hurd of San Francisco as Architects Associated for the District. Assurance of financial support came with the passage of the bond issue on May 20, 1958. The Board of Trustees appointed an Augmented Board for Site Selection whose job was to search for appropriate sites and recommend a final choice to the Board. 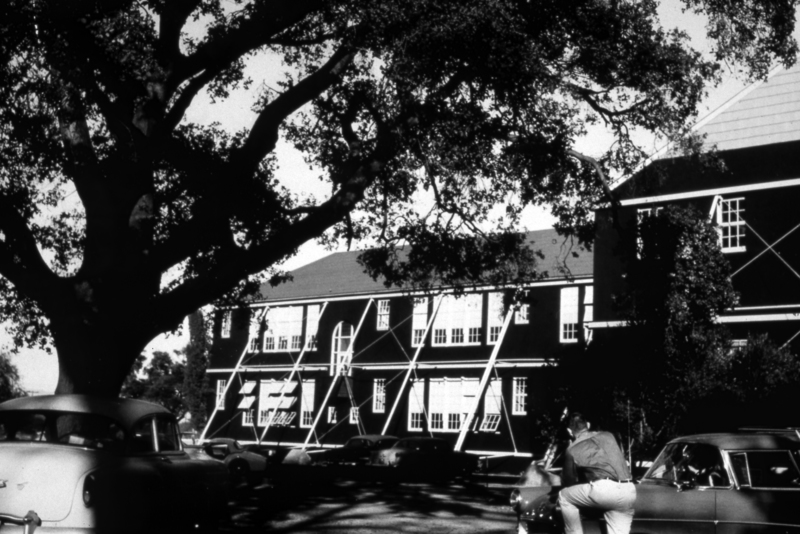 The Highway School on El Camino Real in Mountain View served as the temporary location of Foothill College from 1958 through 1961.

On September 15, 1958, the same day that classes began at the temporary Mountain View campus, the Board of Trustees selected the 122-acre site on El Monte Road in Los Altos Hills as the permanent location for Foothill College. Calvin Flint and the Board wanted the College to become a truly distinct and special institution and felt that it was  very important that they communicate to the architects the objectives and purposes of the College. With that thought in mind, Flint prepared, by the end of September, a "Planning for Campus" summary in which he very clearly stated what he and the Board felt were major philosophical and educational specifications. Also, faculty committees were established to determine specific needs of the various divisions.

On October 20, 1958, the Board of Trustees approved a "Master Plan Program" written by Kump, Masten and Hurd which outlined their interpretation of the general objectives, educational aims, campus organization, and architectural character of the college. The "Master Plan" was designed as a general framework for the architects themselves, as well as a basis by which the Trustees and College staff could fully participate in planning the facilities. In November the architects completed and presented to the Board a master site development plan which was a drawing of the site showing approximately the size, shape and relationship of building groups. At this point, architectural planning was well under way. In the College Accreditation Report of December, 1958, the following comment foreshadowed the role that this unique institution was to play: "Both the Citizens' Committee Report giving recommendations for a financial master plan and the "Master Plan Program" prepared by the architects support the unanimous impression and conviction on the part of the survey team members that the permanent facilities when completed may well serve as a model for junior college construction and development."

A scale model of the campus design was created at a cost of $3,800 in 1959. The  model was taken to various city and county locations to show the innovative design to the local community. 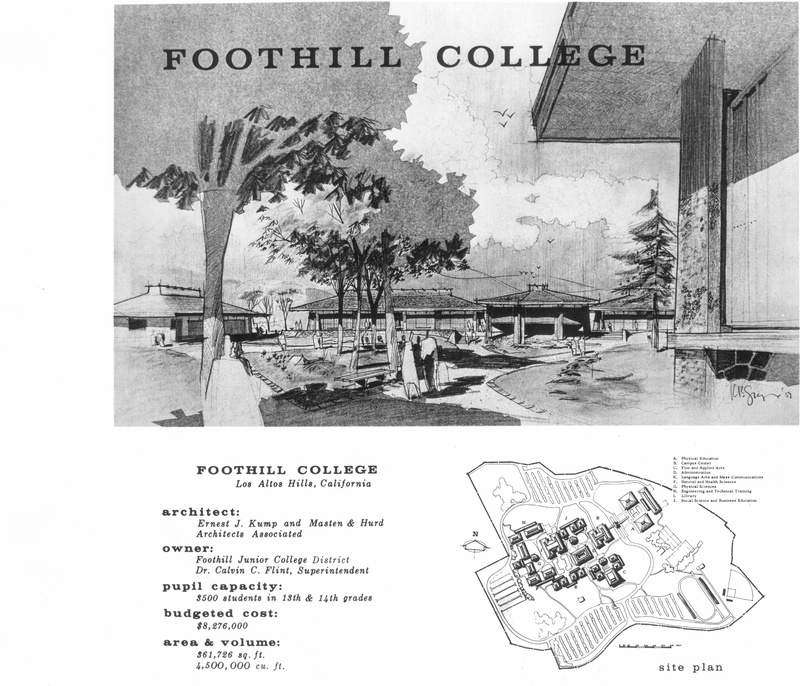 A promotional flyer was created by the architects of Foothill College, showing an artist's rendering of what the campus would look like.

By June, 1959, the end of the first school year at the temporary Mountain View campus, the architects had key building plans of the campus-to-be, and purchase of the El Monte site was completed. Attention then turned toward readying the site itself for construction. Between September and December, 1959, preliminary site development and grading were completed. Community interest in the project was growing, and in the Fall of 1959 an architectural model of the Los Altos Hills  campus, as well as plans and drawings, were displayed by the Board and the architects in the various cities of the District. The architects were nearing the end of their design task. In February, 1960, the Board of Trustees approved their working drawings and were then ready to enter the critical arena of construction bidding. In April, when the first round of bidding took place, the Board and administrators were faced with a large disappointment: all initial construction bids for the total campus exceeded their allocation. Determined to stay within the budget, the Board rejected all bids and reconsidered their approach.  As an alternative plan, they decided to divide the construction into four phases thereby providing tighter reins on the total project and encouraging more companies to compete since the projects would be smaller. The new approach was successful, and in June, 1960, the Board awarded a contract for Project I to Williams and Burrows and to O.E. Anderson, Inc.

Foothill College Under Construction in 1961. Super 8 color film, no sound.

With the target date for completion just a little more than a year away, a feeling of urgency and excitement prevailed. A groundbreaking cememony was held on July 1, and shortly afterward the new campus began to emerge: huge concrete piers, massive wooden beams, redwood exteriors, shake roofs with parapets. In July and October, 1960, General Contractors Williams and Burrows and O.E. Anderson, Inc. were also awarded the contracts for Projects II and IV, while Project III was awarded in August to another contractor, Carl N. Swenson and Company. From July, 1960, through August, 1961, construction proceeded apace. Never before had a U.S. college been built "all in one piece." As the target date approached, it was not certain if the campus would be completed on time. However, on September 5, 1961, the fourth academic year of Foothill College started, and the Los Altos Hills campus was ready for the opening of classes. Students who moved from the Mountain View campus to the new one had developed such an esprit de corps at the old school that they were somewhat reluctant to leave.

Not surprisingly, after they had sampled the new facilities, the prevailing attitude soon became, "I'm sold; so is everybody." Calvin Flint, himself, was heard commenting, "I can't think of a single thing I would change. It's the most functional thing I have ever seen."

Not only were the students, faculty, administrators and the Board of Trustees pleased with the new Foothill College - approximately 6,000 visitors came to see it during Dedication Week that October. The offices of Kump and Masten and Hurd had already won two architectural awards for its design before ground was broken for construction. The campus was featured in numerous magazine and newspaper articles and received a number of awards, including the coveted American Institute of  Architects First Honor Award for 1962, which is the nation's highest professional recognition for architectural merit. Foothill College fulfilled the prophecy of the first accreditation team that it would become a model for junior college construction and development. Architectural Forum magazine of February, 1962, summed it up this way: "The new Foothill College campus ... confirms Forum's prediction that it would set a new high standard of design for junior colleges across the United States .... Foothill's chief significance may not reside in its architecture, excellent as it is, but in its underlying social premise . . . a community college which goes far beyond academic and vocational instruction in its functions ... is really a multipurpose cultural resource serving an entire Bay Region." 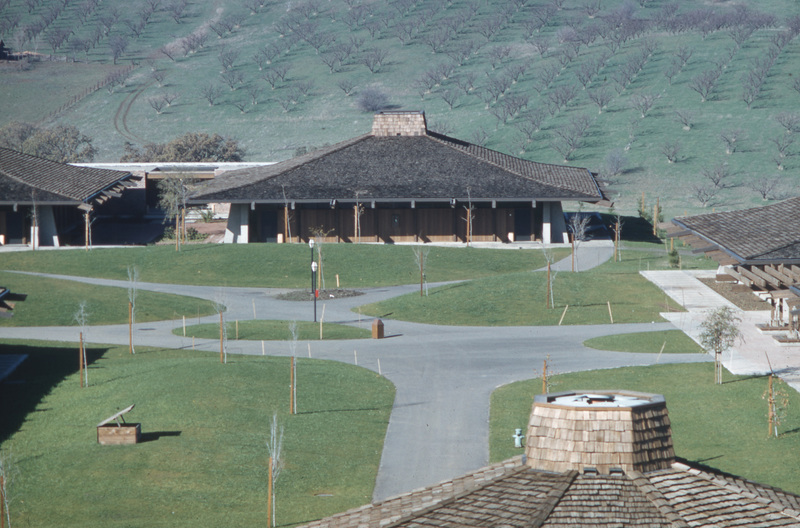 The new campus opened to students in the Fall of 1961 and set a new standard for design of community colleges nationwide.