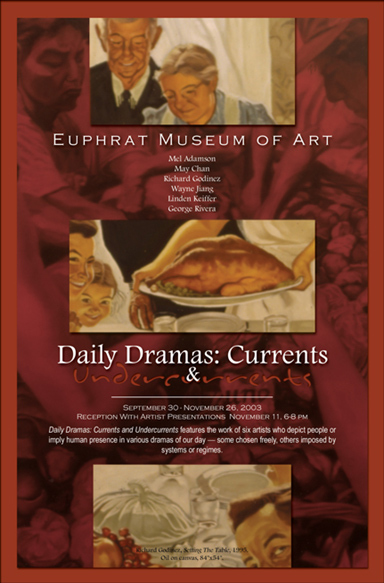 Daily Dramas featured the work of six artists who depicted people or implied human presence in various dramas of our day - some chosen freely, other imposed by systems or regimes. Wayne Jiang presented detailed paintings, life scenes of an extended Chinese American family. Mel Adamson, an art professor from San Jose State University, exhibited large paintings of generational differences, intimacy and distance. George Rivera, a painter who is also the Director of the Triton Museum, painted emotional states behind the roles he had to play. Painter Richard Godinez juxtaposed realities, such as a Norman Rockwell's Thanksgiving dinner and a family looking for food in a garbage dump. Using articles of clothing to stand in for people and the drama of our lives, May Chan's sculptural installation addressed maintaining and developing connections across the Pacific Ocean. Also several painting installations by Linden Keiffer, similar to stage sets with actors and props, constructed a world beyond the indignities of daily racism. Keiffer is the director of The You in Me organization in Oakland dedicated to multicultural and multiracial education. Artist presentation, Wayne Jiang, 10/23/03. 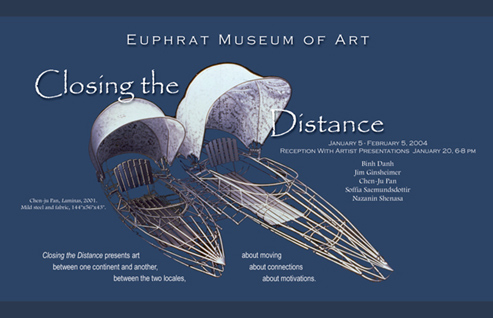 Closing the Distance presented sculpture, photography, and mixed media installation about moving between one continent and another, about connections between the two locales, and how these connections change. It began with a project of two photographers, Binh Danh and Jim Gensheimer, entitled The Journey of Vietnamese Boat People. Danh presented photos of an abandoned Vietnamese refugee camp in Malaysia where he had lived. Gensheimer, a Mercury News photographer, presented photos from the South China Sea (1987) and from Vietnam (1989-2000). Nazanin Shenasa, a textile artist, created an installation related to the changes she saw in Iran, so different from what her parents had told her and what she had read about. Sculptor Chen-Ju Pan, originally from Taiwan, hung her 8'x14'x17' steel, poplar and fabric art kayak from the ceiling - a fantasy boat to escape traditional gender roles and explore new areas. Also on a very large scale were the 9'x13' charcoal drawings of Soffia Saemundsdottir from Iceland whose works were a journey in a landscape more symbolic than real. Artist Presentation Naz Shenasa, 2/3/04. 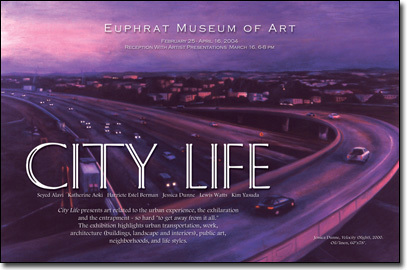 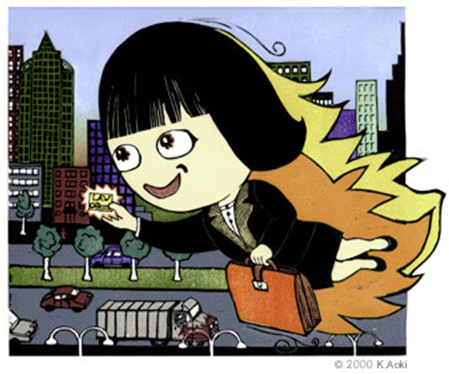 Katherine Aoki, Lawyer, 2000. Using cartoon styles, Aoki's active urban world is populated with women challenging gender-related expectations. One series is about women superheroes, such as the urban lawyer, who are just really good at their jobs.