Animals presented aspects of the animal world and its interface with humans. With a variety of media, the works included three-dimensional animals, animal portraits, animals from Chinese astrology, animals in biology, and more abstract or poetic animals. Animals had fun elements to appeal to children. It included different cultural perspectives, along with ideas and issues that challenge societies. For a Chester Yochida children's book (colored pencil and ink illustrations), all twelve zodiac animals of the Chinese New Year sit down for a New Year's banquet. Ama Torrance's animal sculptures resonate with human feeling. A group of almost life-size sheep is made from polyurethane foam with PVC legs covered with a thick aluminum foil. The epitome of a technological world gone berserk, these plastic foam creatures are lovable and noxious. Some come with their own plastic "shadows" on the floor, while others "don't need shadows." Twelve artists participated, including three from Creativity Explored of San Francisco. Companion exhibition curated for Sunnyvale Creative Arts Center Gallery, Animal Stories, 11/2-12/22/00. Jancy Chang, Leslie Frierman Grunditz, Nina Koepke, Carmen León, Roberta Loach, Hideo C. Yoshida.
Exhibition: Euphrat Visits WORKS. Selection of art from Euphrat's Extended Year Program at Kennedy Middle School. Exhibited at WORKS Gallery, San Jose. 7/18-20/2000. 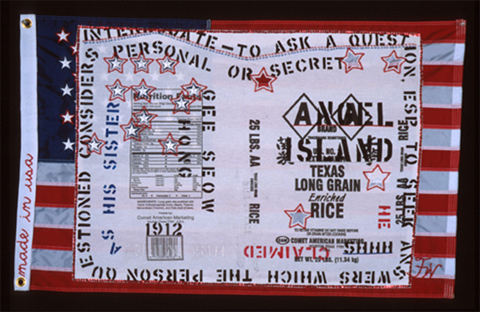 Angel Island presented installation, artwork, and stories with roots in the 20th century and ramifications in the 21st century, particularly in light of the New California, the New Economy. The art revealed human drama. Contradictions arose, for example the contrast between the beautiful setting of Angel Island and what happened there. Viewers saw how new neighbors interacted and built community. Flo Oy Wong's major installation, made in usa: Angel Island Shhh, explored the identity secrets of Chinese immigrants detained and interrogated in the U.S. Both of Wong's parents entered the U.S via the Angel Island Immigration Station and were interrogated under the Chinese Exclusion Act of 1882. Edith Argabrite and her family fled Eastern Europe during the Holocaust and found refuge in Shanghai until they could find it in the U.S. Now she creates paintings, sculpture, and poetry about all that has transpired, life's larger journey, the bad times and the good. With Jose Arenas's moving back and forth between Mexico and the United States, he feels a dual identity, a conflict between the two, the "changing into something else." When he paints a ship alone on a watery globe, with ribbon-like routes crossing over and curling back, we see the magnitude and uncertainty of the journey. Alma Lopez exhibited digital prints that deal with Mexican Americans in the U.S. landscape. California Fashion Slaves focuses on garment industry workers; Juan Soldado on the unofficial patron saint of undocumented immigrants, an "illegal saint of 'illegal' immigrants." During the last two weeks, the exhibition incorporated Mapping the New California, a collaborative public artwork on immigration created by hundreds of local elementary-school students working through the Euphrat's Arts & Schools Program.