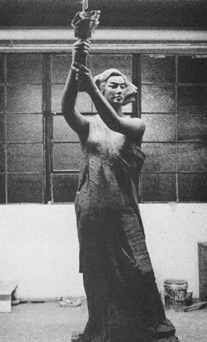 Replica of Goddess of Democracy, 1990. Plaster. 9.5' tall. Created by Thomas Marsh and students from the Bay Area who shall remain anonymous for reasons of security. Fashioned after original sculpture by Kevin Fang and students in China who remain anonymous for reasons of security. The original Goddess of Democracy stood in Tiananmen Square during the student demonstrations in Spring 1989. The replica has been used for Bay Area demonstrations related to the massacre that put an end to the demonstrations for major reforms.

In the Public Eye explores issues and ideas related to art in public places. Cities, developers, campuses, non-profit organizations, artists, and the viewing public are increasingly involved in decision-making regarding art in public places. Through art, models, and documentation (photographs, slides and written materials), In the Public Eye offers the opportunity to explore questions such as: How can an artwork reflect local history? What makes a public art program successful? How do some public artworks become living places or personified objects? This exhibition on public art, with local, national, and international participation, had particular relevance to the college because of a new district policy to purchase art for the campus. The show included a preview of faculty member Sal Pecoraro's model for the Sunken Garden in front of Flint Center. Slides, posters, and articles are available for viewing. Eight-page booklet.
Booklet art included Untitled, Wendy Watriss, 1987, photograph from Watriss's series on the Vietnam Veterans Memorial, Washington D.C., by Maya Ying Lin. Watriss: "It has a life of its own. People stand and stare at it. They touch it. They run their fingers over and over the names of the dead. They lean against it. They trace the names and they cry. Men stand guard for the others who have died, and for those still missing." Art included replica of Goddess of Democracy, 1990, plaster, 9.5' tall, created by Thomas Marsh and Bay Area students who remain anonymous for security reasons. 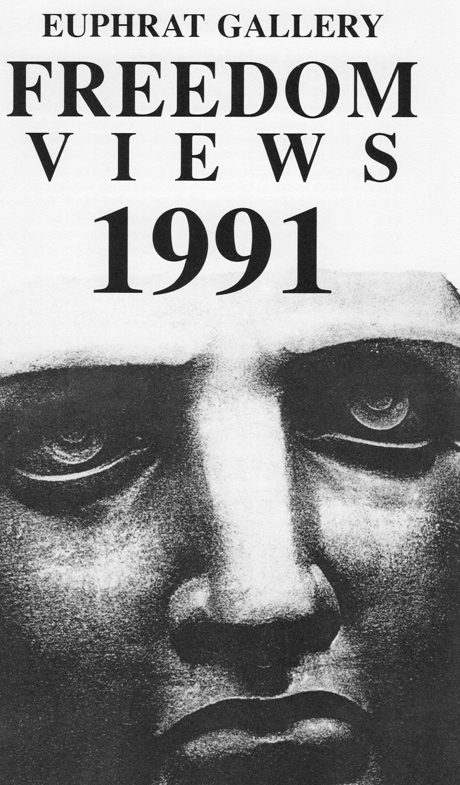