Drawing from Experience: Artists over Fifty
1/2-2/22

Painting, photography, printmaking, sculpture, and works in fiber from private collections in Northern Califoma. The exhibition addressed different approaches to collecting, the kinds of study involved in developing collections, and connections between collectors and artists whose work they collect. Photo: Romare Bearden, Sunday Morning at Avila. 14"x18", Collection of Mary Parks Washington.
Public reception for Room for Art: Works from Private Collections, 4/5. Presentations by Barbara Leventhal-Stern and collector/artist/teacher Cozetta Guinn. Videos: Sixty-second spot of Room for Art: Work from Private Collections, production by Mark Gomez, aired on cable. As part of the Drawing from Experience exhibition, Artist Huellar Banks's interview appeared on the Channel 7 evening news, mid-January. The "Better Part," a video team from the Cupertino Senior Center, produced a half-hour program on the Drawing from Experience exhibition. Aired 5/29, 6/22, on Channel 30, additional cable channels. Half-hour video was composed from most recent spots. 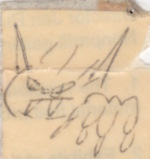 Jennifer Small, untitled, c. 1990. Tiny rapid ink drawing on scrap paper, less than 1-inch-square. Small was Assistant to the Director during 1989 and 1990, helping to guide us through years of tremendous growth for the Euphrat as we branched out. Small created the drawing quickly to counter a frustrating experience trying to organize an event.

As creatives, we came up with ways to quickly recover from frustrations with people or institutions. We might place a scrap of paper with a difficult person’s name on it against a small mirror, which we then hid in our desk drawer as a secret wish for them to self-reflect and correct course. Then onward with our projects. We also kept a “good letter” file of positive, appreciative communications to lift spirits on particularly bad days.