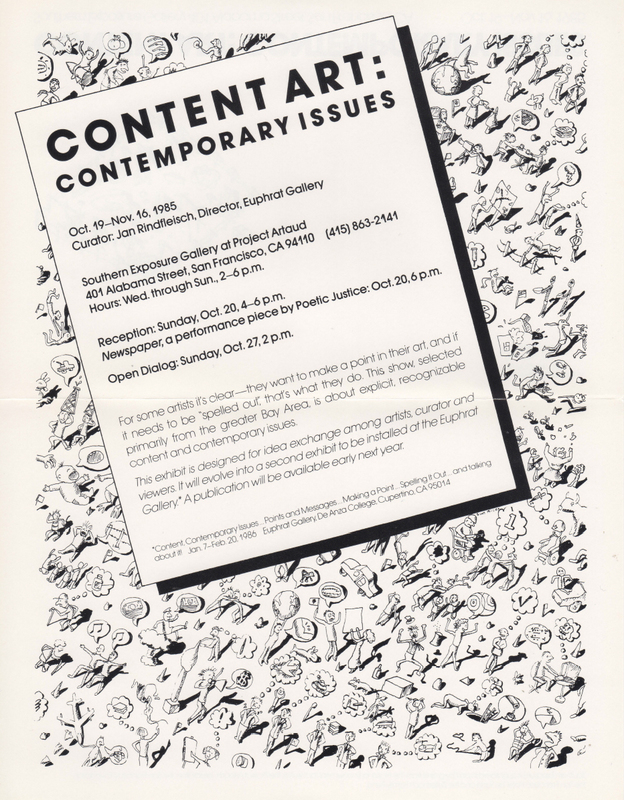 This first "traveling" show of the Euphrat was curated by Jan Rindfleisch and took place at Southern Exposure Gallery in San Francisco. The show was about explicit, recognizable content and contemporary issues. For the artists it was clear - they wanted to make a point in their art, and if it needed to be spelled out, that's what they did. The exhibition was designed for idea exchange among artists and viewers. It evolved into the January Content exhibit at the Euphrat. Euphrat Board reception/tour at Content exhibit in San Francisco, followed by dinner at Culinary Academy, 11/1. Evening reception/tour of the Content exhibition for the California Art Education Association, Northern Area, aimed at curriculum development for exhibition when it came to the Euphrat. Organizer Judith Kays, 11/13. Southern Exposure Gallery Newsletter, No. 5 and No. 6, 1985. San Francisco Focus 10/85 (critic's choice). ARTWEEK 10/26/85.

Cover of four-page announcement of Content exhibition at Euphrat.

CONTENT: CONTEMPORARY ISSUES, Points and messages…making a point… spelling it out…and talking about it!
1/7-2/20/86

In an era of high technology, wood, made up of living cells, continues to be a medium of choice for sculpture and contemporary furniture. With curatorial assistance by Michael J. Cooper, this exhibition featured 23 artists from across the country.