"Another great example of free press can be found in the Euphrat Museum of Art at De Anza College where I am a work-study intern. They have all kinds of art shows that reflect parts of American life and history that aren’t often mentioned in the regular media … Community art museums like the Euphrat Museum are very important to have because here artists can express themselves freely and sometimes reflect another side of life that isn’t often mentioned in newspapers or on commercial television. This is an important part of democracy—the freedom to show, see, and talk about all kinds of artwork, ideas, and events." 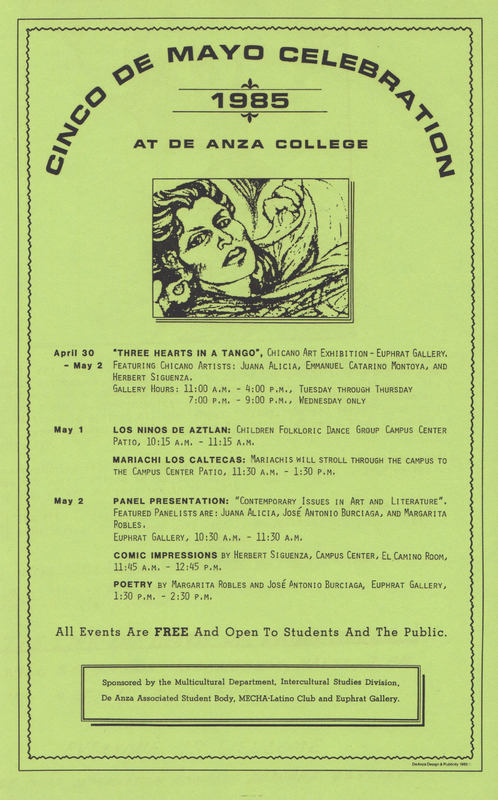 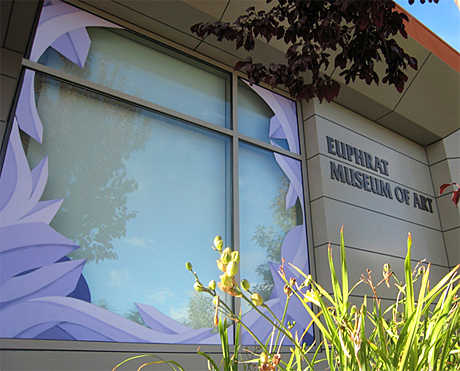 Ricardo Richey, front window painting for our new Euphrat Museum of Art building, 2009, and our second inaugural year exhibition, In Between, The Tension and Attraction of Difference.

From Survival to Triumph: How the Euphrat Grew
Jan Rindfleisch, Euphrat Museum of Art director, 1979–2011:
Prior to 1978, about two-thirds of the original gallery had been converted to classrooms. Proposition 13 passed, resulting in the elimination of funding for the Euphrat. Silicon Valley was a distressed cultural landscape.

With the leadership of Jan Rindfleisch, the years 1979–2011 were an exceptional time of growth and achievement for the Euphrat. We began by building our concept of a forum and drawing people together to create a unique partnership between the college and the community.

Our loose cohort of dedicated idealists included artists Lucy Cain Sargeant and Kim Bielejec Sanzo. Given the token and infrequent remuneration, we would never have survived and succeeded in the early 1980s without the on-the-mark professionalism and eye of Sargeant or the creativity of Bielejec Sanzo. Support from district trustees Franklin Johnson, Dr. Gerald Besson, and Dr. Raymond F. Bacchetti, the latter two serving on the first Euphrat board, was also essential. In 1992, with the expertise and ideas of art historian Patricia Albers, then director of special programs at the Euphrat, we became the Euphrat Museum of Art. The Euphrat board would grow, champion innovation and help build programs, outreach, and the new museum building. This was a most unusual challenge for a community college.